The Iceland Volcano Marathon has a tough course. Be as prepared as possible to conquer the race with info about elevation and route. 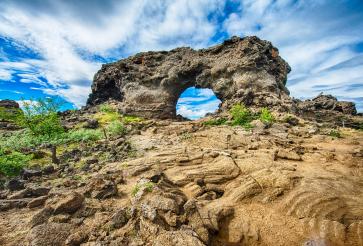 The Iceland Volcano Marathon and half marathon both start at the foot of the mighty Hverfjall volcano crater. The route leads runners west across a road composed of volcanic sand and gravel and onto the main road that encircles Lake Mývatn.

The next 2.5km are run on asphalt and lead to the unique lava field of Dimmuborgir, which means “Black Fortress.” An eruption roughly 2300 years ago created this vast expanse of black lava stacks and caves – folklore surrounding the region often associates it with the gates of hell. In Dimmuborgir, the route follows narrow trails in a counterclockwise circle and then runs under the Gatklettur Arch (pictured).

From there, the trail narrows to a single track for the following 1.1 km. The flora here is extremely fragile and it is very, very important that all runners exercise extra caution and stay on the trail. Do not pass each other if it means stepping off the trail and do make room for each other!

As the trail widens up again, the mighty Hverfjall crater is now front and center. Running clockwise around it, we’ll pass the start line just before heading up the crater itself. Rising more than 100 meters, the view from the top offers a 360-degree view of the North Volcanic Zone. The route follows the rim of the crater all the way around – a 3 km circuit – and back down the same trail we came up.

Continuing north, the route comes very close to the Jardbödin Nature Baths and, although the baths can’t be seen from the route, the volcanic activity below the surface can be seen in the steam rising from the ground.

The marathon runners will now split away from the half-marathon runners as they turn right and run along the east side of the Hverfjall crater. The surface changes to pitch black volcanic sand and lava rock in a landscape that looks more like the moon than the earth.

Shortly after passing the halfway mark, the marathon route changes back to a gray-green landscape consisting of lava rock and shrubbery and leads runners to the bottom of the Ludent crater. At the 25km mark, runners start an out-and-back stretch of approximately 2.5 km, running along a line of smaller craters that popped up more than 2000 years ago as the volcanic activities moved south.

There is a 5-hour cut-off point at 31.5 km, meaning that runners who did not reach 31.5 km within 5 hours of the start will be removed from the race and driven back to the finish line. After the cut-off point, runners will find themselves on another tough, shorter hill leading back onto the black volcanic sand, and then following the same path back towards the Jardbödin Nature Baths and merging again with the half marathon runners.

The final 4 km begin with about 1.5 km on asphalt, taking us past the Grjótagá cave, which was made famous in Game of Thrones (although the cave cannot be seen from the route).

The last 2.5 km stretch is run on a gravel road will lead runners to the finish line at the Vogar Ferdathjonusta.

When passing places of public interest it is important to keep in mind that this race doesn't have exclusivity in the area and all roads and sights are open to regular visitors and locals too. With the early start, however, most of the route will be fairly empty.

Do not forget that this is first and foremost an adventure. We are far away from comforts of home and this makes it impossible to offer services at the same level usually provided in city marathons.

Kilometre signs will be set up along the entire route - except for the rim of the Hverfjall crater. Owing to the conditions, however, the signs may be placed a few metres from the precise kilometer mark, so use signs for orientation only and don’t calculate your speed based on the signs. At critical intersections, route marshalls will direct runners the right way.

Manned water stations will be set up along the course serving clean Icelandic tap water. All runners will be given a collapsable silicone cup that must be carried all the way from station to station. The water is kept in 10 liter tap containers from which each runner fill their cup. Selected stations will also serve TRIBE electrolyte drinks - a 100% vegan product.

One station will be serving energy gels for the marathon runners while all runners will have a Personal Supply deposit possible at station C.

As the race is yet to be run for the first time, the exact placement of the water stations is not 100% confirmed, but expect them to be close to below table:

Remember that we run in wild and unspoiled nature and cups, empty bottles and other trash should be put in the litter bags at the water stations – please do not litter in nature!

The Iceland Volcano Marathon & half-marathon are both scheduled to start at 7:30am. The quarter-marathon will start shortly after. Last-minute changes to the start times may occur.

All runners who complete their distance within the 7-hour time limit will receive a medal. A small, symbolic award will be presented to the top three finishers in each race in the male and female categories.

A light meal is available for runners at the finish line. 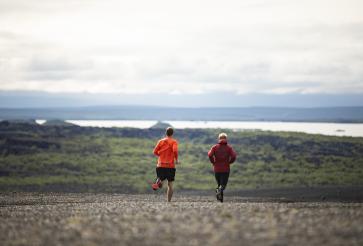 The Iceland Volcano Marathon is run on a variety of surfaces, including asphalt, soft volanic sand, volcanic rock, gravel, and dirt. Although the race can be run in normal running shoes, trail running shoes are recommended if one is hoping for top placement.